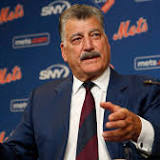 New York Mets great and SNY broadcast analyst Keith Hernandez will be out for the rest of the season due to a tendon tear on his shoulder. The legend missed a step while walking and fell.

Last night, Albert Pujols hit his 699 and 700th homerun. The internet was there to capture it all — the pitch, the result, the reaction. A story in images, videos, links, and Tweets. The Pitch. We talked a week ago about the types of pitches that ...

With two home runs at Dodger Stadium, Pujols becomes first Latin player to join 700 club on an notable anniversary with a bat handed him by a first-year batboy.